Vader motioned Luke closer to him. “Luke, help me take this mask off.”

The Dark Lord’s voice was weary. “Nothing can stop that now. Just once let me face you without it. Let me look on you with my own eyes.”

Luke was afraid. Afraid to see his father as he really was. Afraid to see what person could have become so dark—the same person who’d fathered Luke, and Leia. Afraid to know the Anakin Skywalker who lived inside Darth Vader. 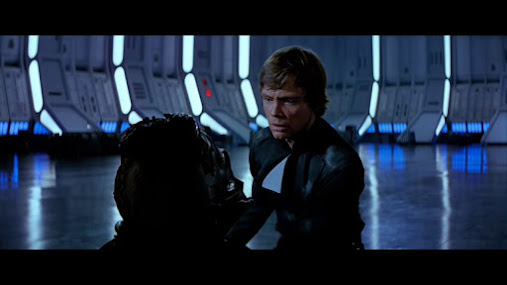 Together they lifted the heavy helmet from Vader’s head—inside the mask portion, a complicated breathing apparatus had to be disentangled, a speaking modulator and view-screen detached from the power unit in back. But when the mask was finally off and set aside, Luke gazed on his father’s face.

It was the sad, benign face of an old man. Bald, beardless, with a mighty scar running from the top of his head to the back of the scalp, he had unfocused, deepset, dark eyes, and his skin was pasty white, for it had not seen the sun in two decades. The old man smiled weakly; tears glazed his eyes, now. For a moment, he looked not too unlike Ben.

It was a face full of meanings, that Luke would forever recall. Regret, he saw most plainly. And shame. Memories could be seen flashing across it … memories of rich times. And horrors. And love, too.

It was a face that hadn’t touched the world in a lifetime. In Luke’s lifetime. He saw the wizened nostrils twitch, as they tested a first, tentative smell. He saw the head tilt imperceptibly to listen—for the first time without electronic auditory amplification. Luke felt a pang of remorse that the only sounds now to be heard were those of explosions, the only smells, the pungent sting of electrical fires. Still, it was a touch. Palpable, unfiltered.

He saw the old eyes focus on him. Tears burned Luke’s cheeks, fell on his father’s lips. His father smiled at the taste.

It was a face that had not seen itself in twenty years.

Vader saw his son crying, and knew it must have been at the horror of the face the boy beheld.

It intensified, momentarily, Vader’s own sense of anguish—to his crimes, now, he added guilt at the imagined repugnance of his appearance. But then this brought him to mind of the way he used to look—striking, and grand, with a wry tilt to his brow that hinted of invincibility and took in all of life with a wink. Yes, that was how he’d looked once.

And this memory brought a wave of other memories with it. Memories of brotherhood, and home. His dear wife. The freedom of deep space. Obi-Wan.

Obi-Wan, his friend … and how that friendship had turned. Turned, he knew not how—but got injected, nonetheless, with some uncaring virulence that festered, until … hold. These were memories he wanted none of, not now. Memories of molten lava, crawling up his back … no.

This boy had pulled him from that pit—here, now, with this act. This boy was good.

Suddenly he smelled something—flared his nostrils, sniffed once more. Wildflowers, that was what it was. Just blooming; it must be spring.

And there was thunder—he cocked his head, strained his ears. Yes, spring thunder, for a spring rain. To make the flowers bloom.

Yes, there … he felt a raindrop on his lips. He licked the delicate droplet … but wait, it wasn’t sweetwater, it was salty, it was … a teardrop.

He focused on Luke once again, and saw his son was crying. Yes that was it, he was tasting his boy’s grief—because he looked so horrible; because he was so horrible.

But he wanted to make it all right for Luke, he wanted Luke to know he wasn’t really ugly like this, not deep inside, not all together. With a little self-deprecatory smile, he shook his head at Luke, explaining away the unsightly beast his son saw. “Luminous beings are we, Luke—not this crude matter.” 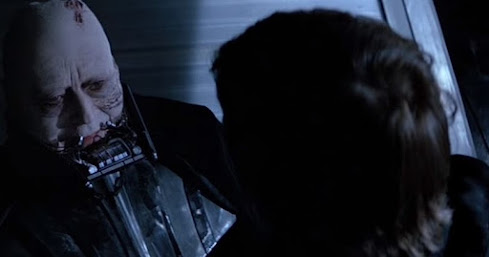 Luke shook his head, too—to tell his father it was all right, to dismiss the old man’s shame, to tell him nothing mattered now. And everything—but he couldn’t talk.

At that, Luke found his voice. “No. You’re coming with me. I’ll not leave you here. I’ve got to save you.”

“You already have, Luke,” he whispered. He wished, briefly, he’d met Yoda, to thank the old Jedi for the training he’d given Luke … but perhaps he’d be with Yoda soon, now, in the ethereal oneness of the Force. And with Obi-Wan.

“Father, I won’t leave you,” Luke protested. Explosions jarred the docking bay in earnest, crumbling one entire wall, splitting the ceiling. A jet of blue flame shot from a gas nozzle nearby. Just beneath it the floor began to melt.

With that, he closed his eyes, and Darth Vader—Anakin Skywalker—died.

A tremendous explosion filled the back of the bay with fire, knocking Luke flat to the ground. Slowly, he rose again; and like an automaton, stumbled toward one of the last remaining shuttles.